Finding it difficult to control your eating? These 6 Proven Steps Will Help You Stop Binge Eating.
Break Binge Eating > Inspiration > What You Should Know About The Effects of Social Media on Body Image

The Internet has had a profound impact on how we choose to live our lives.

We now use the Internet for many different purposes, including work, shopping, learning, and entertainment, and there’s no doubt that it has been hugely beneficial.

A lot of us are also using the Internet to communicate with our friends, family, and work colleagues through social networking sites, like Instagram, Twitter, and Facebook. In fact, nearly 75% of younger adults are active on social media.

Although there are many benefits to using social media, they also pose important risks. In particular, research has shown that increased social media usage is linked to a range of different mental health problems, including depression, anxiety and stress 1Kelly, Y., Zilanawala, A., Booker, C., & Sacker, A. (2018). Social media use and adolescent mental health: Findings from the UK Millennium Cohort Study. EClinicalMedicine, 6, 59-68.

A lot of clinical, public, and research attention has also been devoted towards understanding the relationship between social media usage and young peoples’ body image.

Unfortunately, social media usage has indeed been strongly linked to body dissatisfaction, and there is speculation that the spike in social media usage in recent years has resulted in an increase in eating disorders and disordered eating 2Mabe, A. G., Forney, K. J., & Keel, P. K. (2014). Do you “like” my photo? Facebook use maintains eating disorder risk. International Journal of Eating Disorders, 47(5), 516-523.

In this article, I’m wanting to dive into the link between social media and body image.

Before addressing this question, I think it’s worth touching on the distinct attributes of social media technologies relative to conventional mass media.

Social media differs to conventional media in the following ways.

It’s also important to remember that social media allows users to do the following:

All of these characteristics unique to social media can have a profound impact on body image.

The question on how social media affects body image is not an easy one to answer.

Social media influences are complex, and it’s wrong to believe that social media will exert a simple, direct impact on body image concerns.

There appears to be two key variables that explain why social media leads to body image problems.

Social comparisons that are upwards in nature are the real problem. This occurs when one compares themselves to someone better off than themselves.

In the social media domain, such upward comparisons occur when someone compares themselves to another person who has more followers or who receives more likes, shares, and comments on certain images, posts or videos.

For these people, individuals who compare themselves to others may conclude that they’re not attractive enough and that they may need to change what they look like. It also directly impairs an individual’s sense of self-worth.

This may also explain why people spend a heap of time planning their next selfie or the planning the right pose to capture their “good side” and most attractive self. People usually spend a lot of time editing their selfies, adding filters, taking many selfies before choosing the best one to post, and constantly worrying about the feedback from their followers.

All of these subtle behaviours can greatly impair an individual’s body image.

Another variable that can explain why social media leads to body image problems is the internalisation of appearance ideals5Perloff, R. M. (2014). Social media effects on young women’s body image concerns: Theoretical perspectives and an agenda for research. Sex Roles, 71(11-12), 363-377.

This refers to the extent to which an individual buys into the idea that achieving a thin or muscular body will bring forth happiness, success, and wellbeing.

People who use social media and have this belief are at a lot of risk for future body image problems.

This is largely because social media is filled with quotes, videos, and images that reinforce or sets unrealistic beauty standards.

One quote that comes to mind when I think about this is “nothing tastes as good as skinny”.

Exposure to this content just feeds into this belief that beauty equals happiness and worth.

And because these beauty standards portrayed in social media are largely unrealistic, modified, and are an inaccurate representation of life, people often assume that they’re not good or attractive enough.

It’s not reasonable to ask someone to remove all forms of social media.

As I mentioned, social media is an important tool to help connect with other people all around the world.

Although social media can cause a negative body image, there are a bunch of strategies you can implement to protect against the negative effects of social media.

Here are some strategies to consider if you’re worried about the effects of social media on your body image.

Have you got any other strategies that helped you improve your relationship with social media? Let me know in the comments below. 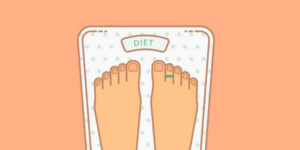 Body Checking: What Is a Body Check & How to Stop Them