The number of people worldwide actively dieting to lose weight is at an all-time high.

With advancements in modern information technology, it’s now much easier to count calories or macro’s because an app can do this effortlessly for us.

There are now hundreds of different calorie or exercise tracking apps available to download, the most popular being My Fitness Pal, Lose it!, and Fat Secret.

Although calorie counting apps may help people lose weight in the shorter term, experts are concerned that they may also promote eating disorders or disordered eating.

So, is calorie counting a bad thing after all?

Why Calorie Counting can Lead to Eating Disorders

There are three reasons why experts speculate that calorie counting could be harmful.

Calorie counting is just a behaviour that falls under the broad “dieting” umbrella.

There’s a lot of research showing that dieting increases the risk of eating disorders, so it naturally follows that calorie counting is, in part, accounting for dieting’s effects on eating disorders.

Calorie counting has the potential to elicit a pattern of black-and-white, obsessive, and perfectionistic thinking styles.

Think about it: when we count calories, we usually set ourselves a very specific limit (say, 2,000 calories), and it’s not uncommon for some people to feel like they’ve failed when they’ve gone over that limit.

Alternatively, having an app handy with us at all times of the day can prompt us to obsessively track our progress or frantically plan our food intake, which ultimately causes us to become highly preoccupied with food and eating.

Each of these thinking styles (black-and-white thinking, perfectionistic thinking, and obsessive thinking) are well-known risk factors for eating disorders and disordered eating.

Third, calorie-tracking apps may eventually become a way for people to quantify their self-worth.

For example, if you meet your caloric target, you might experience a boost in self-esteem and develop an inflated sense of self-worth.

On the other hand, if you go over your caloric target, you might think that you’re a failure, you can’t accomplish anything, and that you’ll never reach your weight-related goals.

These thought patterns are said to drive the overvaluation of weight and shape, which is considered the core psychopathology responsible for driving all other eating disorder features.

What does the Research Say?

Are all of these valid reasons?

In other words, is calorie counting bad, and could it cause eating disorders or disordered eating?

The broad answer is we don’t know just yet.

I’ll explain this in a moment, but let me just highlight the key findings of some specific studies that have looked into the relationship between calorie counting and eating disorders.

The key findings of this study were:

Australian researchers wanted to see what these relationships looked like in men. In this study, 122 adult men who were recruited mostly from health and fitness forums took part in the survey that asked them specifically about My Fitness Pal 2Linardon, J., & Messer, M. (2019). My fitness pal usage in men: Associations with eating disorder symptoms and psychosocial impairment. Eating behaviors, 33, 13-17.

The key findings were:

U.S researchers took a unique approach by investigating these relationships in 105 individuals who already had an eating disorder and were seeking treatment 3Levinson, C. A., Fewell, L., & Brosof, L. C. (2017). My Fitness Pal calorie tracker usage in the eating disorders. Eating behaviors, 27, 14-16.

What Does all of This Mean?

These three key studies indicate that calorie counting via mobile apps has the potential to lead to eating disorder symptoms.

However, there’s an important caveat that needs to be kept in mind.

Each of these studies are cross-sectional in nature, meaning that it is impossible to know what occurred first: the calorie tracking behaviour or the eating disorder symptoms.

It could very well be that people with eating disorder symptoms seek out calorie tracking apps.

In contrast, it could also be that calorie tracking causes eating disorder symptoms.

We need well-controlled experimental and longitudinal research to tease this apart.

I personally suspect that the relationship goes both ways.

I think it might be safe to conclude that calorie counting could be a problem for some people, but not for others.

We just now need to understand what types of people might be most affected.

It’s highly likely that those who take it to the extreme by practising very strict diet rules, feel compelled to count calories every day, and experience significant anxiety and stress when they don’t meet their goals would be worse off.

On the other hand, those who take a much more balanced approach, where they use the device intermittently to help with structure are probably less likely to be negatively impacted.

How Can I Stop Being Obsessive, Then?

This is the million dollar question.

Let me end this article off by providing 3 tips to help you stop obsessively counting your calories.

If you’re someone who is obsessive about calorie counting, then it’s likely that these behaviours are negatively impacting your day-to-day functioning, indicating that you’re better off not tracking anymore.

Now, you don’t want to go “cold turkey” because this will create even more anxiety and can cause things to spiral out of control.

You need to wean off gradually by taking small steps towards reducing your tracking behaviour.

For example, you might start by tracking everything except for supper.

Then a week later move onto tracking everything except supper and dinner.

Then once you don’t feel anxious or preoccupied anymore, you’d move onto only tracking breakfast.

Eventually, you want to get to a point where you’re tracking only meal per day, a time in which you could probably stop tracking for good without any devastating consequences.

Ultimately, you need to find a slow system that works for you, and it’s best that you don’t rush things.

Part of the reason why you might obsessively count calories is because you don’t actually know what it means to feel hungry or full.

You’ve gotten so used to eating based on external cues (e.g., time of day, last meal, calories consumed already) that you don’t know what it’s like to feel hungry or satiated.

When you develop these cues back, you’ll be much more confident in your ability to wean off the calorie counting because your body will be able to tell you when and how much food needs to be eaten.

Also, a better understanding of your body cues is linked with far less food preoccupation, meaning that the anxiety should also subside.

As a first step, after every meal ensure to track your hunger and fullness level, using a scale from 0 (absolutely starving) to 10 (absolutely full).

With enough repetition, you should over time have a better sense on what being hungry or full truly feels like.

This knowledge can then help guide your eating patterns.

3. Be Present and Meditate

Meditation is an excellent tool for this context.

When you’re an obsessive calorie tracker, it’s likely that you have a bunch of negative thoughts competing for your attention.

One thought could be that you need to log your food immediately otherwise bad things will happen.

Another thought could be that you’re concerned you’ve forgotten to track something you ate earlier on.

These negative thoughts are what causes us to ruminate about calorie tracking.

Rather than avoiding or acting out on these thoughts, we need to embrace them, accept their presence, and pay attention to their particular form.

Mindfulness meditation will help with this.

This exercise will help you attend to those negative thoughts in a non-judgemental fashion, and once you realise that these are just thoughts that come and go, you won’t feel the urge to act on them.

If you practice enough meditation enough, these negative thoughts will decrease in frequency and intensity, allowing you to reduce your regimented calorie counting behaviour. 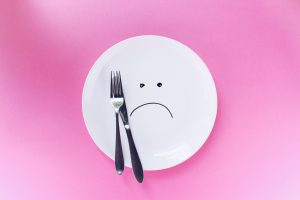 What Disordered Eating Is And How You Can Spot It