Finding it difficult to control your eating? These 6 Proven Steps Will Help You Stop Binge Eating.
Break Binge Eating > Tips & Advice > What to Do after a Binge Eating Episode

Before we discuss what you should do after you binge eat, we need to first clarify what exactly binge eating means. Understanding this is important in helping you recognize your own eating behaviour.

So, let’s talk about what binge eating means.

Binge eating can be usefully defined as “eating uncontrollably”. The definition extends a little beyond this, in that it can be defined as eating a large amount of food in a short period of time accompanied by a sense of loss of control 1Fairburn, C. G. (2013). Overcoming binge eating. London, UK, Guilford Press.

We can distinguish between two types of binge eating episodes:

The first is objective binge eating – this is when a person eats a very large amount of food (usually around 2,000 calories) in a period of ~2 hours or so, accompanied by a sense of loss of control.

The second is subjective binge eating – this is when a person eats an amount of food that isn’t perceived by others as large but is also accompanied by a sense of loss of control.

There is also a wide range of features that accompany both types of binge eating. These include:

What to do after a binge

1. Stick to the plan

Recall that self-monitoring (if done properly and thoroughly) is useful because it provides important information about the nature of your binge eating while regular eating (i.e., eating 3 meals and 3 snacks, spaced 3-4 hours apart) is important for addressing the rigid dietary restraint behaviours that are causing you to binge2Fairburn, C. G. (2008). Cognitive behavior therapy and eating disorders. New York, NY, Guilford Press..

So, if you’ve had a binge, then you need to ensure you stick to the plan. That is, continue monitoring – write down why you binged, what you were thinking and feeling before and after the episode, what you ate, and where you were. This will help you give that vital information needed to move forward, prevent any future set-backs, and break the cycle.

But more importantly, stick to the regular eating schedule. If you’ve binged sometime during the day, then that shouldn’t mean that you’ve finished eating for that day. You may feel guilt or shame. This is normal. But you need to plan your next meal or snack in around 3-4 hours’ time and you need to eat again at that time.

The reason for this is that if you were to restrict yourself for the rest of the day (because of the guilt you’re experiencing), there’s a good chance that you’ll binge again later that night.

Sticking to the plan and not “giving up” for that day is pivotal for preventing any further binges on that same day. And yes, you’re probably not going to be hungry a few hours after your episode. That’s fine. Still eat a small snack. Remember, you’re not eating for hunger purposes – you’re eating this snack to prevent any future binge eating occurrences!

2. Be present and productive

When people binge, they experience a whole host of negative thoughts and emotions. The worst thing to do is to be passive. By that, I mean sitting in your guilt, shame, and despair.

Sitting in it will likely give you an urge to either binge again or to compensate.

You need to be active and do something about it. This is the secret to recovering from your binge.

Doing something that is independent of food and eating that will occupy your attention and will allow you to drown out those negative thoughts, emotions, and urges. Eventually, enough time will pass where you’re ready to move on from the episode and instead focus on other important things that in life.

Some nice distracting tasks could be:

What not to do after a binge

People usually consume a lot of calories during a binge eating episode.

This causes people to feel incredibly guilty about their behaviour and there is often an immediate fear of weight gain.

Because of this, it’s very common for people to commit to going on an even stricter diet after the episode is finished. For example, after a binge on the weekend, someone may feel that in the coming weeks they need to either eliminate carbohydrates, eat at a much lower calorie deficit, detox, or ramp up any other self-imposed diet rules to undo the effects of the binge.

This is the worst possible solution.

Because you’re setting yourself up for another episode in the future, then another commitment to diet, and then even more binge eating. The cycle never ends if dieting harder is your solution.

So, rather than committing to another diet, it would be much more beneficial to take a more flexible or intuitive approach to eating, where you remove any diet rules you have and include as many food types (in moderation) into your diet as possible. This will allow you to remove the “on and off” nature of your eating behaviour, avoid typical weight fluctuations, and enable a healthier relationship with food.

After a binge, people tend to think in all-or-none terms.

They think that they’re a failure, that their day’s ruined, and that there’s no hope for change.

This couldn’t be further from the truth.

You need to take a balanced approach to this situation. Recognise and acknowledge any slip-ups. If you acknowledge your behaviour and own it, then you can move on more adaptively. Doing so will also prevent you from feeling the need to “start fresh on Monday”.

Take action immediately after that episode. Move on. Be strong. Use positive self affirmations.

Your hard work hasn’t been undone by one minor episode.

There’s no good reason to engage in compensatory behaviours (e.g., taking laxatives, self-induced vomiting) after a binge. Compensatory behaviours are ineffective methods to undo the effects of a binge3Kaye, W. H., et al. (1993). “Amount of calories retained after binge eating and vomiting.” American Journal of Psychiatry 150: 969-969..

Practising these behaviours can only be negative. For example, not only are they physically damaging, but they tend to just add fuel to your weight and shape concerns and desire to diet (the factors causing you to binge in the first place).

In addition, some compensatory behaviours like self-induced vomiting leave you feeling very hungry. Being hungry after you’ve binged is a major problem when your eating behaviour is so chaotic. This is because there’s a high probability of you starting a new binge eating episode.

If you’ve got an urge to compensate, just ride it out. Urges disappear over a short period of time. If you’re able to ride it out, then the urge should dissipate. Engaging in some of these activities mentioned above should help you get rid of the urge. Again, it comes back to being proactive.

Experiencing an episode of binge eating isn’t pleasant. It can cause a range of negative thoughts, feelings, and behaviours. However, it doesn’t have to be that way. You can implement some of these techniques to mitigate the perceived damage of your prior episode and prevent the onset of future episodes.

As always, this takes practice and patience. Be kind to yourself and acknowledge that it will take some work.

Let me know in the comments how you dealt with your last binge eating episode.

You can also check out my recent guest blog post detailing 4 evidence-based tips for managing binge eating over the holiday season. 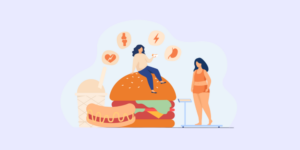 These 6 Proven Steps Will Help You Stop Binge Eating

A Guide to Food Addiction and 4 Tips for Overcoming It What is Binge-Eating Disorder (BED)?

Signs and Symptoms of Binge-Eating Disorder